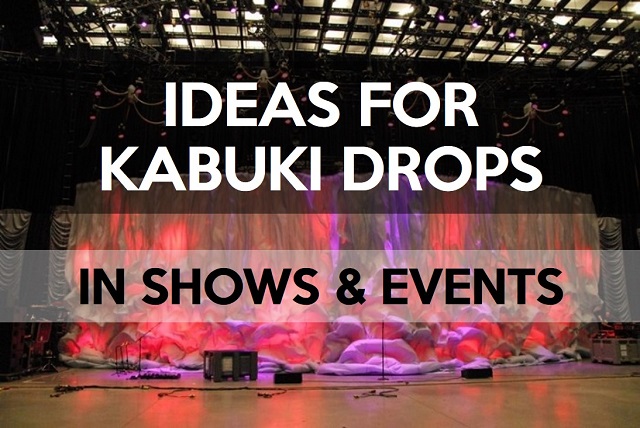 Ideas for Kabuki Drops in Shows and Events

Here are some different ideas for Kabuki Drops in shows and events. A Kabuki Drop is a stagecraft technique and a release system that drops an open suspended curtain to the floor for a dramatic reveal.

A curtain or drape is suspended and held open by a specially designed system that holds the cloth securely until it is needed to be released.

The system is generally attached to some kind of overhanging horizontal support structure like a flying bar or lighting truss. The trigger mechanism to release the cloth can be activated either manually or electronically.

The modern-day Kabuki Drop finds its roots in the historic Japanese dance-drama, Kabuki Theatre. Traditionally, a curtain drop was used as a stagecraft technique to reveal a change of a scene. This technique was known as “Furiotoshi”, which literally means, “shake down to reveal”.

A Kabuki Drop can add tremendous visuals and theatrical texture to any show or event.

Here are a collection of ideas on how to incorporate a curtain drop in a show or event:

Kabuki Drop as a Direct Reveal

The most obvious way to use the Kabuki Drop is as a direct reveal in a show or event.

It is often used in theatrical stage performances or special events to reveal a cast of performers, stage set or product.

You can also have a logo or brand identity, printed or silk-screened on the curtain; although most modern applications use video projection instead.

Large Kabuki Drops can even used to reveal a building facade as seen below:

At the top of a show or event, a white curtain (cloth) hangs down and covers the front of the stage. An introductory teaser video is seen via projection on the curtain to introduce the show, event, product or performers. At the end of the video, the curtain drops for the reveal.

This is a great way to create a spectacular customized opening for a show or event.

Check out this video from a Volkswagen launch that demonstrates how a cool animation sequence can be integrated with a Kabuki Drop.

Here is an example of combing dance with video mapping/ animation for a reveal sequence for Volvo.

This is a simple but very dramatic and visually appealing sequence you can incorporate with a Kabuki Drop.

This theatrical effect creates anticipation and suspense. It has been used for many theatrical shows such as the Blue Man Group and you can see how the band One Republic uses this concept to great effect for the opening of their show.

Here is an idea to create an even stronger visual “magical” effect to reveal a person or group of people.

In sync with appropriate music, the person(s) literally walks slowly from behind the light, step over and walk forward downstage (towards the curtain). The audience will see the person(s)’s silhouette “magically” appear and grow larger.

The curtain drops and reveals the person(s).

This is a simple but very effective way to introduce a performer(s) or VIP.

One variation of the Kabuki Drop is the advent of the “Double Kabuki drop”. The traditional drop is a SINGLE Drop. That means the curtain will already be opened up in place and covering the stage. Activating the curtain drop will drop the curtain to the floor revealing what is on stage.

A double drop can be activated either manually or electronically and ANY system can be adapted as a double drop.

The Double Kabuki Drop can be used as a cover device to set an illusion or change a stage set as a visual change from the traditional main or Austrian curtain.

This is also particularly useful for stages that do not have a main curtain that can be closed for set stages.

A double drop can be used to create an awesome “magicial” appearance, using the cloth as a cover.

Check out this video from illusionist, Brett Daniels’, old show. The effect in question is at the top of the video. Nuff said!

For some shows or events, there is a need for an all-round or surrounded Kabuki Drop. This means the curtain covers all four sides of a reveal area or it can be circle or oval-shaped.

This is necessary if the audience is surrounding the reveal area such as an arena, shopping mall, open space or circus.

In this set-up, the Kabuki Drop system must be running in a series under and around a square, rectangular or round overhanging structure like a lighting truss.

The trigger mechanism must activate all drop points to drop all sides of the curtain at the same time. The curtain comprises of one large “circle” or material.

Kabuki Drop with a Sniffer

A kabuki drop with a lightweight cloth combined with a sniffer or motor-pull can create a beautiful reveal.

This means after the cloth is dropped, it does not drop to the ground but looks like it gets “sucked” up into the ceiling.

Have a look at two examples below:

I actually came up with my first DIY Kabuki Drop for a friend in 1996 for his church event. It was a glitter drop where a bunch of confetti dropped from the top of the stage.

In this case, a curtain is not dropped to the ground for a reveal but is used as a holder for the glitter.

The glitter drop can be used at the end of an event to create an even “snowfall” of confetti and can also be used as a holding device can also be used to drop other items like balloons, ping pong balls and anvils… ok, maybe not anvils.

Kabuki Drop as a Utility Cover for Magic Illusion Effects

For magic & illusion performances, magicians can use the Kabuki Curtain to cover a large illusion or finale set piece and reveal it when needed.

A double Kabuki Drop can also be used in conjunction with an illusion utility such as an illusion deceptive base or Black Art Table.

The first drop unrolls the curtain and is used as a cover. The second drop drops the curtain to the base or table to reveal the appearance or vanish.

This gives a nice remote-look to the cover device for the illusion, enhancing the visual look and magic-feel of the effect.

My “Shadow Appearance” illusion uses a self-contained cloth drop system and I have also invented a professional manual Kabuki Drop system that is mounted onto flying or lighting bars/ trussing.

If you are a stage or theatre practitioner for shows or events, you might want to include the “Ultimate Kabuki Drop Resource” in your library.

Besides being the definitive resource on Kabuki Drops, the book includes six original designs for Kabuki Drops that are easy and inexpensive to build. There are different plans for different needs & venues with original ideas and design elements.

Available as a full-colour print book and an eBook here. 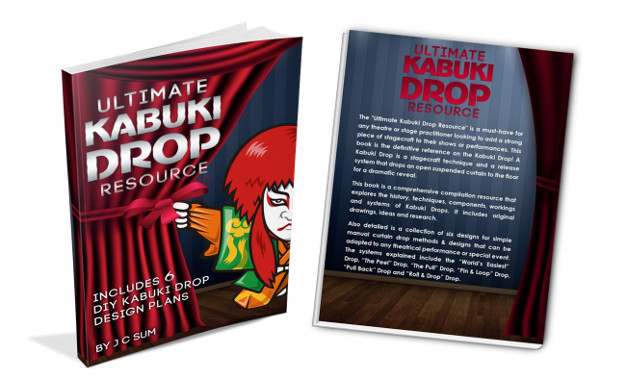